Diagnostic Accuracy of Dermoscopy of Actinic Keratosis: A Systematic Review

Copyright: ©2020 Valdés Morales et al. This is an open-access article distributed under the terms of the Creative Commons Attribution License, BY-NC-4.0, which permits unrestricted noncommercial use, distribution, and reproduction in any medium, provided the original author and source are credited.

Competing interests: The authors have no conflicts of interest to disclose.

Authorship: All authors have contributed significantly to this publication.

Introduction: Dermoscopy is a tool that aids clinicians in the diagnosis of actinic keratosis; however, few diagnostic accuracy studies have determined its sensitivity and specificity for this diagnosis.

Objective: Determine the diagnostic accuracy of dermoscopy on actinic keratosis.

Methods: A systematic review was conducted on EMBASE, PubMed, Scopus and the Cochrane Central Registry of Controlled Trials from inception to August 2019.

Conclusions: Studies that focus specifically on the diagnostic accuracy of dermoscopy for actinic keratosis are lacking.

This work is licensed under a Creative Commons Attribution-NonCommercial 4.0 International License.

Actinic keratosis (AK) is a cutaneous neoplasm that arises on chronically sun-exposed skin. For years, AK was considered to be a separate entity from squamous cell carcinoma (SCC) [ 1 ] , a premalignant lesion; however, in recent years this concept has been challenged, and now most authors consider AK the continuum of SCC [ 2 – 4 ] . The rate of progression to SCC differs greatly among the studies, ranging from 0.025%–20% per year [ 5 , 6 ] ; however, it has been documented that 60%–80% of SCCs arise from AK. Correct diagnosis is important for prompt treatment [ 5 ] .

Dermoscopy is a tool that aids in the clinical diagnosis of multiple melanocytic and non-melanocytic lesions. Several dermoscopic patterns for the detection of AK have been described: gray structures, scale, and rhomboidal lines, among others, for pigmented AK [ 7 – 9 ] , and linear wavy vessels, follicular plugs surrounded by a pink-red pseudonetwork, and scaling have been described in nonpigmented AK [ 10 ] . Despite the widespread use of dermoscopy, there are no recent systematic reviews that report the sensitivity and specificity of this tool in the diagnosis of AK.

The main purpose of this study was to determine the sensitivity and specificity of dermoscopy for the diagnosis of AK.

We included studies in which participants were adults (>18 years old) and studies that followed a diagnostic accuracy study flow, ie, patients with suspicion of AK underwent a dermoscopic examination (index test) then a histopathological study (reference standard test). Published articles written in the English or Spanish language that followed this study flow were included in the systematic review. Studies in which participants had the histopathological diagnosis of AK prior to examination of dermoscopic images by an evaluator, studies in which the clinical and dermoscopic diagnosis was not blinded from a dermatopathologist, and case reports were excluded.

A literature search was conducted on EMBASE, MEDLINE, Scopus, and the Cochrane Central Registry of Controlled Trials from inception to August 2019. The key words used were “actinic keratosis” and “dermoscopy,” as well as its synonyms “dermatoscopy” and “epiluminescence microscopy.” Studies that met the criteria were retrieved and reviewed by 2 researchers, and discrepancies were settled by a third researcher. The extracted information included study type, number of patients in each study, patient characteristics, type of test, and reference standard. Two authors independently extracted these data, and discrepancies were identified and resolved by discussion with a third reviewer.

The search yielded a total of 1,165 studies; duplicates were removed, and a total of 485 titles and abstracts were reviewed ( Figure 1 ). Seventeen studies were read in full text, and 2 of them fulfilled eligibility criteria, with a total of 219 actinic keratoses in 210 patients ( Table 1 ). Both studies showed a male predominance, as well as a mean age that ranged between 67 and 69 years. The studies were held in Australia, Italy, USA [ 14 ] , and Spain [ 15 ] . 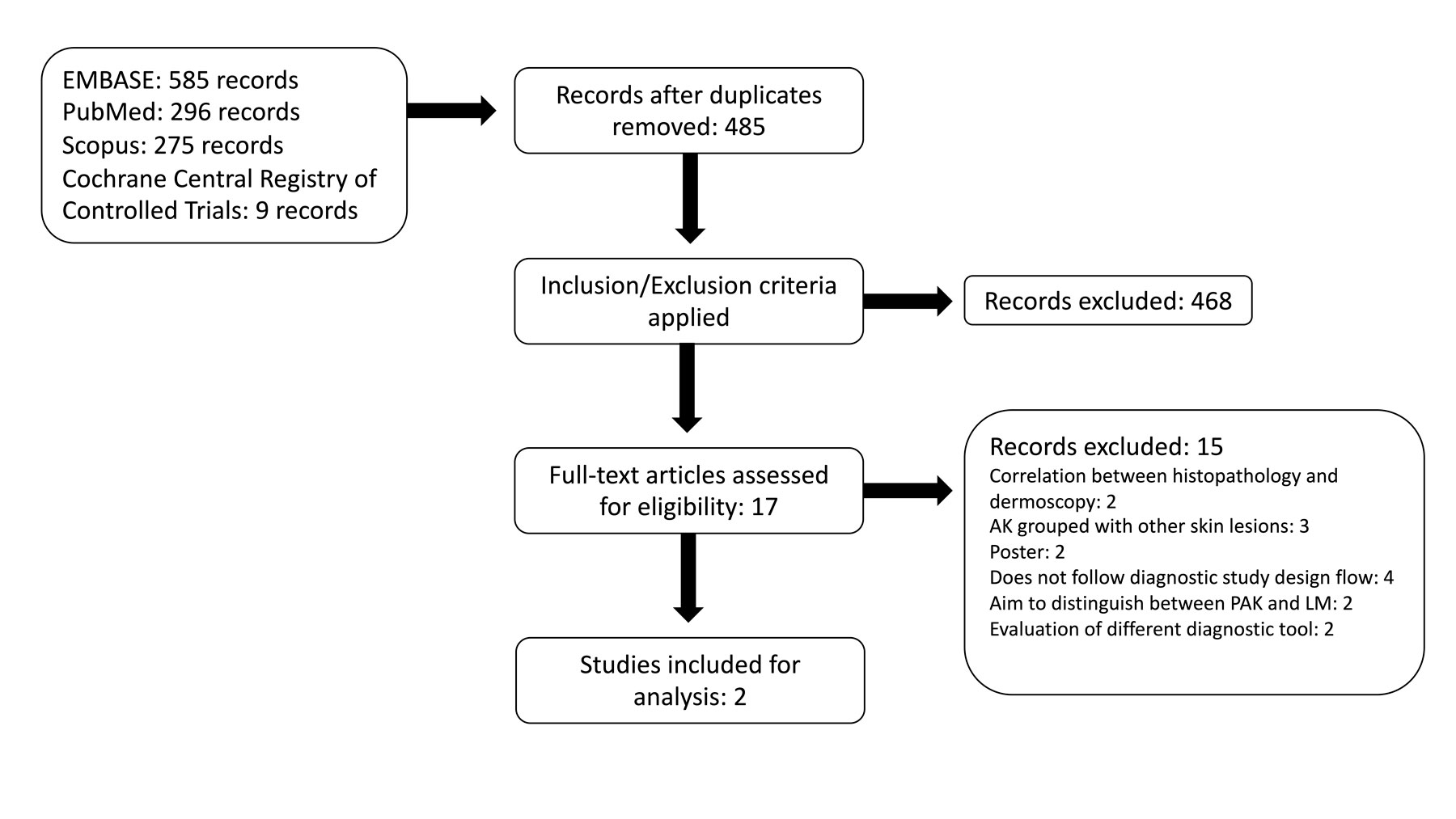 Of the 15 excluded studies, exclusions were mainly due to study flow and to different study objectives, for example, determining correlation between histopathology and dermoscopy [ 16 , 17 ] , aiming to distinguish between pigmented AK and lentigo maligna [ 7 , 18 ] , determining dermoscopic pattern frequency [ 19 ] , or evaluation of a different diagnostic tool [ 20 , 21 ] , among others. Excluded studies and reasons for exclusion are presented on .

Both studies evaluated the characteristics of dermoscopic photographs, including erythematous pseudonetwork, surface scale, linear wavy vessels, and follicular plugs. Zalaudek et al added coiled and dotted vessels to the dermoscopic features being evaluated. Sensitivity and specificity of dermoscopy for the diagnosis of AKs were calculated by Huerta-Brogeras et al [ 15 ] with a sensitivity of 98.7% and specificity of 95%. In the second study [ 14 ] , all but one dermoscopist suspected AK as the initial diagnosis with an overall sensitivity of 97.5%; however, in 19 of those lesions, the initial diagnosis also included Bowen disease or superficial basal cell carcinoma. If we consider these cases as negative tests, the calculated sensitivity would decrease to 51.2%.

Overall, the most common dermoscopic finding was surface scale (86.7%), followed by follicular openings (83.1%) and erythematous pseudonetwork (79.9%), both comprising the “strawberry pattern,” and lastly, linear wavy vessels (71.2%). Important clinical and methodological heterogeneity between the studies was considered, so a pooled sensitivity and specificity was not calculated.

In this review, 2 studies fulfilled inclusion criteria with a low risk of applicability; Huerta-Brogeras et al had a low risk of bias, whereas Zalaudek et al had high risk of bias, mainly due to study flow and timing, not clearly specifying eligibility and exclusion criteria, as well as timing of the histopathological diagnosis within the study flow. The most common dermoscopic finding in both studies was the presence of a red pseudonetwork surrounding follicular openings comprising the “strawberry pattern” [ 14 ] .

Despite the widespread use of dermoscopy for AK, few studies that prospectively evaluate its sensitivity and specificity have been published. Descriptive studies have been completed, wherein the frequency of each dermoscopic sign [ 19 ] or its correlation with histopathological findings are reported [ 17 , 22 ] . Of 70 AKs studied by Zalaudek et al in 2012, the red pseudonetwork was the most frequent finding (67.1%), followed by scales and targetoid hair follicles [ 23 ] . Kelati et al described dermoscopic findings in 232 cases of facial pigmented AK, and the most frequent findings were: rhomboidal appearance (82.8%), inner gray halo (58.6%), scales (39.2%), jelly sign and superficial pigmentation (37.5%), among others [ 19 ] . Lee et al examined the correlation between dermoscopic and histopathological findings in Korean patients. Among the results was the frequency of dermoscopic findings in 61 AKs from 47 patients: white yellow scale (73.1%), targetoid sign (65.4%), white structure-less area (50%), red background (50%), red pseudonetwork (46.2%), and rosettes (7.7%) [ 17 ] .

Studies comparing dermoscopic features to distinguish between lentigo maligna and pigmented AK have been published [ 7 , 9 , 18 ] . Akay et al evaluated dermoscopic parameters of lentigo maligna in facial pigmented skin lesions; 67 pigmented AKs were included in the study, and the frequency of dermoscopic findings was reported: slate gray dots (70%), annular-granular pattern (39%), brown-to-gray pseudonetwork (36%), and rhomboidal structures (36%) were the most frequent. In their study, the presence of pseudonetwork was found to be specific for pigmented AK [ 18 ] .

In 2012, Rosendahl et al [ 24 ] conducted a diagnostic accuracy study of dermoscopy on melanocytic and non-melanocytic pigmented lesions, and a few years later, Gomez-Martin et al [ 25 ] published a diagnostic accuracy study of dermoscopy and reflectance confocal microscopy on pink flat lesions of the legs. Both studies followed an adequate diagnostic accuracy flow design and performed a quantitative analysis of data, including sensitivity and specificity; however, even though AKs were included in both studies, Gomez-Martin et al grouped AKs with SCC and Bowen disease, while Rosendahl et al considered AK a superficial variant of SCC and grouped them with malignant lesions in the study. Bowen disease and SCC are the main differential diagnoses of AK, and the lack of specific results for AK was the reason for exclusion of these studies from the present review.

The most significant limitation of this study is the inclusion of only 2 studies in our analysis. The aim of this study was to perform a diagnostic accuracy systematic review with a meta-analysis; to achieve this, we only included studies in which the study flow of a diagnostic accuracy study was followed (clinical suspicion followed by performance of index test followed by the reference standard test) in order to calculate sensitivity and specificity. The initial study was designed to include only nonpigmented AK, then we broadened our inclusion criteria to both pigmented and nonpigmented AK. However, after a thorough review of the literature, 17 studies evaluated dermoscopy as a diagnostic tool for AK, and only 2 studies followed this flow. Most of the studies that evaluate dermoscopic characteristics follow a different study flow: dermoscopic findings are retrieved from dermoscopic images with known histopathological diagnosis. This low number of included studies led to the impossibility of performing a quantitative analysis of data.

Multiple lesions on chronically photodamaged skin can lead to the clinical diagnosis of AK; a single AK, on the other hand, may present a more difficult clinical scenario in which dermoscopy plays a determining role in diagnosis. The characteristic “strawberry pattern” is most frequent in facial lesions but is not commonly found in extra-facial regions [ 26 , 27 ] . This characteristic pattern may also be absent in different types of AK, such as bowenoid AK, where a vascular pattern of glomerular or coiled vessels may be seen [ 26 ] , or hyperkeratotic AK, where scale is the predominant feature. Future studies that examine the dermoscopic pattern of AK on non-facial topographies, as well as of different types of AKs, are needed.

Dermoscopy is a practical tool to aid in the diagnosis of AK; however, studies that focus specifically on the diagnostic accuracy of dermoscopy for actinic keratosis are lacking.